Thanks for making the 18th Sandia Snowshoe Race a big success!

The weather forecast was frightful, but that didn’t stop almost 100 intrepid snowshoers from participating in the 18th Sandia Snowshoe Race.

Click on an image above to read an article from the Albuquerque Journal or watch a 6-minute movie summarizing the race. Unfortunately, the videographer’s iPhone went black just before the racers returned, so coverage of the end of the race and post-race activities is sparse.

The weather forecast was frightful — low temps, high winds, and a slight chance of snow. Indeed it was cold and windy as we prepared for the race, but the wind subsided and the sun frequently penetrated the cloud deck by race time. A good time was had by all. KOB-TV and the Albuquerque Journal were there and will feature the event in coming days. Check back for more information including photos and videos.

The race was conducted as a self-timed, fun activity; however, bib numbers were recorded in the order participants crossed the finish line. The results are available by clicking on the image at right.

Thanks to everyone who participated in the race or helped make it happen! Find yourself in the video or photos. See you next year.

Lots of photos are available for viewing and downloading. In either gallery below, click on a thumbnail to enlarge the image. The runners appear in the order they passed the marshal station. You can download a specific image using your browser’s “Save image as…” function. Each gallery displays 56 thumbnails at a time. You will need to back out of the slide show and advance to the next set of thumbnails to continue.

The photos below were taken by Dan Benton at his marshal station at the intersection of Kiwanis Road and Crest Trail, the first turn the racers had to make.

The photos below were taken by Stefan Martin, whose marshal station was where Crest Trail makes a sharp turn to the right to head towards the Tram.

Silke Bletzer reports: “We have a total of 105 runners signed up for the snowshoe race tomorrow! Quite a group: one 13- and two 14-year-olds, two 78-years-young and everything in-between.”

FOSM volunteers including race marshals inspected the course today (Friday) and found the snow conditions good except for a section on pavement at the Crest parking lot. Race organizers decided to move the start/finish line downhill thereby shortening the course from 3.1 miles to about 2.9 miles. 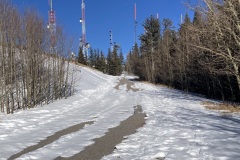 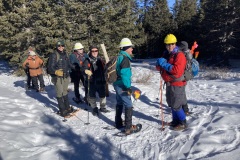 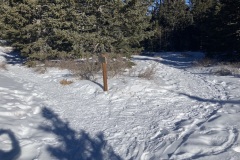 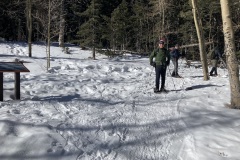 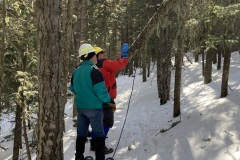 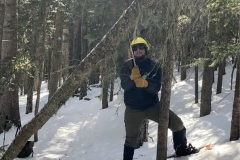 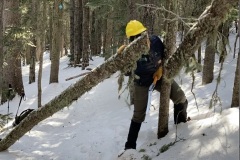 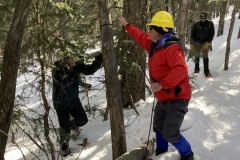 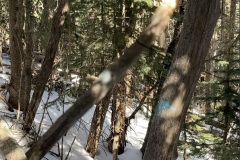 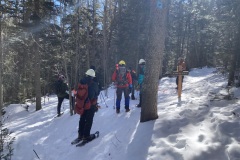 Lou prepared an interesting history of the event in preparation for his interview that you can read here.

Videos and photos by Cliff Giles unless otherwise noted.